For those paying attention while around us, markets crash and companies fail, much of London has been busy with groovy-looking people assembling at events, workshops and exhibitions. The London Design Festival (which just finished) and London Fashion Week make September in London visually and intellectually stimulating and provide evidence that the creative economy is still highly dependent on social capital, not to mention the other sort.

During the London Design Festival, a panel discussion entitled "Can you teach it?" organized by the Financial Times brought together people involved in different ways in education and creativity: Michael Craig-Martin (artist and former tutor in fine art at Goldsmiths College), Ilse Crawford, interior designer and professor at the Design Academy in Eindhovern, Mat Hunter of IDEO, and Nick Leon, director of Design London. The event was chaired by Peter Aspden, arts correspondent at the FT, whose opening remarks pointed out the coincidence of Damien Hirst's paradigm-shifting sale of artworks by auction (raising £111m) during the same week that major financial institutions such as Lehman Brothers were failing.

The speakers, despite their differing backgrounds and working contexts, seemed to agree with each other on many of the points they discussed. These were (in no particular order) that:
- you can't teach 'creativity' as such but you can create possibilities for creativity to be freed
- the possibilities for creativity are linked to early years and secondary education
- changes in UK education resulting in an emphasis on assessment may stifle creativity in students
- creativity is a social process
- creativity requires constraints.
Nick Leon helpfully drew distinctions between some of the terms being used - creativity, design and innovation. His argument that what are needed now are Renaissance teams, not Renaissance individuals, makes sense to anyone who sees design as a multi-disciplinary effort.

But creativity is hard to think about out of context. The focus in this event, during this particular festival, was about the creativity, especially visual creativity, we associate with artists and designers, and the commercial and social value we give it. We should not forget the creativity involved in creating novel forms of financial instrument that make it almost impossible for financial regulators, or even managers in the same industry, to work out how much an asset is worth. That creativity - shorn from an ethical set of practices - is one that is going to shape the world for the next few years at least.
Posted by Lucy Kimbell at 12:17 pm No comments: 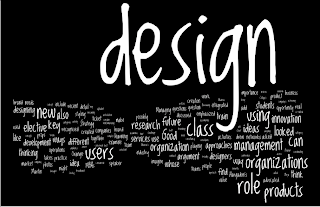 The final class of the elective drew on recent work in organization studies which takes the metaphor of management as being a kind of design practice. Boland and Collopy's conference and book Managing as Designing brought together leading academics and practitioners to explore this idea. More recently Roger Martin, dean of the Rotman School of Management has advocated integrative thinking and design thinking, arguing that executives should be aware they are involved in the design of business. A recent issue of the Journal of Business Strategy co-edited by Martin with strategy professor Jeanne Liedtka presented different approaches to thinking about this.

Borrowing a tool from the world of scenarios, students then created future news articles five years into the future which told stories of their (real) organizations. They were asked to imagine what could happen if the design-led approaches discussed in the elective were used in their organization. Finishing the elective in this way emphasized the importance of the imagination: a critical and possibly neglected approach to envisioning the future in contrast to the analytics of strategy.

Image by http://wordle.net/
Posted by Lucy Kimbell at 4:23 pm No comments:

Our guest speaker for this class was Andrew McGrath, head of design and usability at Orange Global. Andrew's presentation drew together ideas from other sessions including how the design team is integrated into a large and complex international company like Orange and its role in developing new products and services. Like the previous week's speaker, he emphasized the importance of design being integrated into a company's operations - a challenge for individual designers who through education or personality retain the idea of the designers as creative genius. His team work closely with the branding and market research teams. Their activities include consultancy for Orange's operations in different countries, the creation of style guides for products and services delivered by mobile networks, broadband and TV and benchmarking of customer experiences. "Good design can flourish in a corporation," he said but warned "this takes masses of effort and cunning to put it into practice."

The reading for this class included Hargadon's ideas of design leadership using design principles and practices; Hatchuel's concept of design-oriented organisations which develop a learning culture in order to exploit new knowledge and new concepts; and Verganti's research into innovation inspired by networks of designers and their creation of new product languages.
Posted by Lucy Kimbell at 4:10 pm No comments: 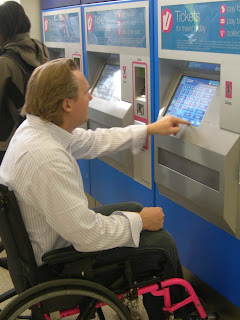 This class looked in detail at user-centred and human-centred design. Most of it was taken up with a practical exercise, using experential learning to examine how assumptions about end users of designs are built into them. A development of the idea of 'lead users' (von Hippel), the design method that involves following extreme users is a way to bring into focus the needs and desires of users whose activities might stress or break a design, or who know it inside out through their repeated use of it. 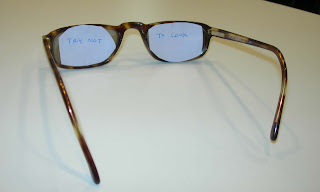 The class were given some props: a wheelchair; a pair of crutches; ear plugs; and modified sunglasses. I also asked the class to imagine being someone who could not speak English nor read the Roman alphabet. The students' task was to find out train times and ticket information (using the web, phone service or in person) and then buy a ticket and board a train. The point was not to examine just the needs of users with recognised disabilities (where design is often governed by legislation) but to consider also users whose use of a design is hampered by reduced vision or a hearing impairment. The photos show some of the MBAs playing their roles using their props, while others filmed, took photos and notes. (Our thanks to the staff at Oxford train station for their patience!) 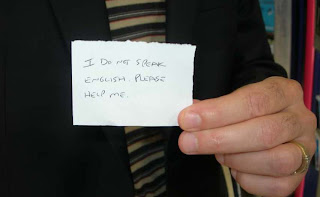 The approaches called universal design (advocated by companies like Oxo whose Good Grips brand has created a new category of highly desirable home products easily used by older people) or inclusive design make an argument about designing to include people who may not fit the obvious marketing categories. This is can be an ethical argument, but it can also be seen as an opportunity for innovation. 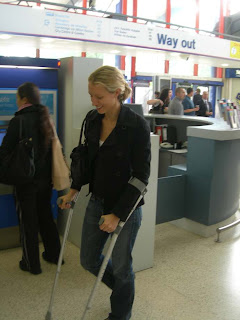 The first week of the elective looked in detail at the design process, design methods, the ways we think about 'good' and 'bad' design and introduced some of the newer design disciplines. This session looked at the way that design can be managed to add value within organizations. The field of design management has articulated some of the different ways real organizations do this: differentiating organizations through a powerful and consistent brand and through the styling of products; coordinating the development of products and services in multidisciplinary teams; or possibly playing a more transformational role, helping ask questions about the future and having a key role in innovation (Borja de Mozta). We considered the question of how to organize to make best use of design: as an internal function, or using external consultants? Hargadon's research into IDEO's role as technology brokers provided an important argument about the benefits of the cross-pollination of ideas from industry to industry.

For managers, a key question is how to assess the effectiveness of design, broadly conceived, or a design department. There's no standard framework for this. We looked at research by the Design Council that found a positive correlation between companies that were recognised as achieving good design, and stock market performance. We also discussed how awards can sometimes mark out organizations for whom the role of design is key.

During this class students had an opportunity to reflect on the role of design in their own organizations. Did they find evidence of silent design, or design management in which design helps differentiated products through styling or having a key role in new product development; or did they think that design played a role in asking strategic questions for the organization? Not surprisingly, few of the MBAs knew of an organization that had a 'Chief Design Officer' at board level. But several wanted to find ways to think about how they might implement some of the elective's ideas in their own firm - potentially becoming design leaders themselves.
Posted by Lucy Kimbell at 10:26 am 1 comment: