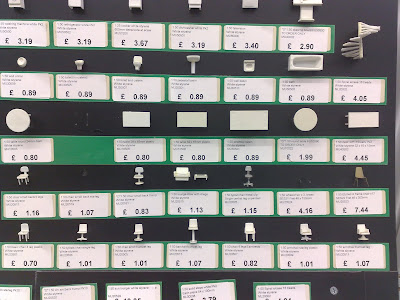 With Nina Wakeford (Goldsmiths, London) and Laurene Vaughan (RMIT, Melbourne), I organised a panel for the annual conference (1-4 September) of the ESRC Centre for Research on Socio-Cultural Change, in Manchester. The conference title - "Objects - What Matters? Technology, Value and Social Change" - offered, we thought, an opportunity to consider the transition in design theory and practice away from objects at a time when social science is increasingly paying attention to them.

This panel addresses two moves: the shift within design from attending almost exclusively to objects, towards users and stakeholders in their engagements with objects; and the shift within social theory away from societies and people towards objects. Attending to objects, in particular their form, has been central to design theory and practice since the emergence of a modern discipline of design. For Alexander (1962), designers were makers of form. Designers were concerned with how to create the right form balancing form and function and his contribution was to propose a systematic rational method to get to the right form. Then, discourse about design moved from a focus on the outputs of design to a generalisable "design thinking" (Buchanan 1992) which could be applied to nearly anything. For Buchanan, designers' problems were ill-structured or "wicked" (Rittel and Webber 1973) and their solutions could take form as signs, objects, environments or systems. The emergence of design problems at the intersection of humans and digital technologies spawned new ways of thinking about design especially an increasing focus on "users". User-centred design, interaction design and experience design all decentred the object in design with ethnographic and participatory practices entering design discourse - even if activities in many design studios and design schools looked and sounded remarkably stuck on the forms of the new digital objects. Krippendorff's (2006) recasting of design as human-centred formalized a theory of design as being about stakeholders and the meanings they create through interacting with objects, even as social theories were paying increasing attention to objects and less to meaning.

Recent publications by scholars, practitioners and government bodies claim that design, or rather design thinking, has the power to stimulate or drive innovation and transform organizations and even societies. But the term “design thinking” is confused and the literature on which it is based is contradictory. This paper contributes to understanding design activity and its effects by reviewing literature and identifying problems with the concept drawing on theories of practice in sociology, science and technology studies and organization studies. It proposes an alternative way of conceiving of design activity, without privileging the work done by designers, by attending to the practices of others involved in constituting design outcomes. Introducing a pair of concepts – design-as-practice and designs-in-practice – to replace design thinking solves a number of problems facing researchers in design and management. The paper’s contribution is to make an explicit link between design and social science in order to advance understanding about designers’ work and value creation.

This paper will discuss the relationship between design, the object and affect. Typically, but not always, objects are designed to exist in the world of human habitation. Objects are designed, modified, adapted and adopted by people as part of the everyday experience of living; and just as objects are “designed” by people, it can also be said that people are designed by the objects of their world. Through a particular discussion of the phenomenon of dress the intimate relationship between people and material culture will be explored.

The Model and the Object
Nina Wakeford, Goldsmiths, University of London

Based on research amongst experience designers, this paper discusses the origins and use of the ‘experience model’ in design practice. Often a graphical representation, the experience model is understood as a way by which knowledge can be passed between user-centred researchers and the designers. Drawing on theories of the work of visual representations in Science and Technology Studies (e.g. Henderson’s On Line and On Paper, 1998) this paper discusses the way in which the model might be said to constitute an object within design practice, rather than an intermediary stage in reaching the object. Looking back at the history of one design consultancy which pioneered such models, the paper also reflects on the ways in which models work as aesthetic objects, and the challenges this poses to STS thinking about visual representations.

When I have the other papers, I'll post them here.

About the image: A photo of architectural models taken with permission at the marvellous 4-d modelshop in London E1
Posted by Lucy Kimbell at 9:43 am No comments:

When you are a researcher, you are supposed to know your field which in practice means something like knowing the history and origins of the field; understanding key concepts, theories, methods and tools; and keeping up to date with leading practitioners and other researchers. So this is your job. And you have your tricks for accessing the leading thinking and practice most likely combining the institutional (libraries, journals, databases, academic conferences, professional meetings, magazines) and the more informal (blogs, twitter, facebook, personal communications and oh yes – gossip). And then every now and then something comes along and makes you realise that your tricks have failed you. Something you really should have known about, but you didn’t, illustrates just how partial your research is.

This has recently happened to me. In the process of putting together a proposal about design for service in healthcare, I came across important work that was not on my radar. It really should have been (especially since I had downloaded the journal paper but never read it and trawl through service design blogs where the work was mentioned). But it was not.

I publish this confession here to point other researchers and practitioners interested in service design and design-led innovation to work that makes a valuable contribution to research and teaching by describing and analysing the application of design-based approaches based in attending to experience to innovation in healthcare services. Bate and Robert’s book (see below) draws in detail on a pilot study involving London-based consultancy Think Public using what Bate and Robert call “experience-based design” approaches and methods with head and neck cancer patients, carers and staff as a way to improve services in an English hospital. Bate and Robert’s discussion of the roots of experience design (or service design rooted in stakeholder experience) in phenomenology, ethnography and narrative offers managers an intelligent but digestible analysis of what this approach does, how, and why it matters. It's on my MBA reading list for next year for sure.

Book
Bate, Paul and Robert, Glenn (2007) Bringing User Experience to Healthcare Improvement: The Concepts, Methods and Practices of Experience-Based Design, Oxford: Radcliffe.
Some of the book is available to read here.

Web resources
Think Public
The NHS Institute of Innovation and Improvement has synthesized this study and presents an overview of experience-based design. People working inside the NHS can order a toolkit and access other resources.

Academic paper
Bate, Paul and Robert, Glenn (2007) "Toward More User-Centric OD: Lessons From the Field of Experience-Based Design and a Case Study." Journal of Applied Behavioral Science, 43; 41
Posted by Lucy Kimbell at 11:13 am No comments: