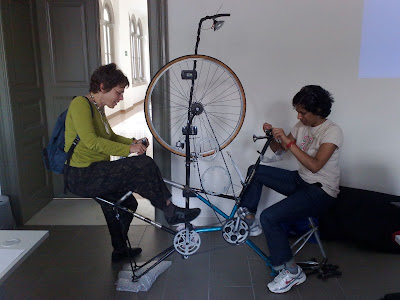 The growing interest among design researchers in science and technology studies and among STS researchers in design and arts practices seemed to reach critical mass this year. At the EASST (European Association for the Study of Science and Technology) conference in Trento, Italy, earlier this month there were two tracks concerned directly with design, another looking at the arts and the sciences, and another on video research, all in response to the theme: Practicing science and technology/performing the social.

This was the first time I had been to a major STS event but was pleased to meet people I know who also travel in design and art contexts. Having a chance to be with several of them in a room together for a few hours was stimulating. I have hung around STS people for several years now - a lot of them hired by my former dean, the late Anthony Hopwood, including Steve Woolgar, who still hasn't got used to being in a business school (see the special issue of Organization, January 2009, Does STS mean business?) and also my collaborator Andrew Barry with whom I made Personal Political Indices. With Nina Wakeford (Goldsmiths) I have set up collaborative projects between sociologists of her acquaintance and my and Nina Pope's MA interaction design students at the Royal College of Art (2005). We co-curated with Alex Hodby an interdsciplinary exhibition as part of the EIASM workshop on Imagining Business in Oxford (2008) which included a catalogue (read some of it here). And last year at the ESRC Centre for Research on Socio-Cultural Change conference we organized a track on design in collaboration with Laurene Vaughan (RMIT, Melbourne) with Guy Julier (Leeds Met) as respondent. These modest experiments in teaching, presenting research and engaging in dialogue have left me surprised how few the exchanges between design and STS have been.

Within mainstream design studies, other than a special issue of Design Issues (Volume 20, Number 3, Summer 2004) on science and technology studies, and recent posts on the PHD-Design list about the validity or otherwise of Actor Network Theory, I do not think that design researchers have taken STS seriously. Within Computer Supported Cooperative Work and Participatory Design, there are much richer conversations with many of the leading researchers such as Lucy Suchman and Jeannette Blomberg moving between several fields, but much of this research has tended to focus on IT-based design rather than say products, communication design, architecture, or the arts more generally. I think there is potential for the version of design based in industrial design to engage more with STS which made EASST particularly enjoyable.

I cannot do justice to the complexity of the debates in this post (or perhaps even in the PHD I'm supposed to be writing) so here's a lite slacker version. STS research is all about noticing local, situated accomplishments and tracing how stable designs are achieved. Design research and practice is getting more social but without asking itself which version of the social is being enacted. STS research talks about studying performativity and materiality but relies still on written texts for producing and disseminating research. Design attends in detail to the material and often to individual designer's practices but neglects seeing design as a collective activity that is not just the work of professional designers. STS research has spent years studying engineering designers and scientists but has not yet grappled significantly with traditions in design and the arts that are open to speculation, serendipity and things being messy and unfinished.

Most of the time I spent at the track organized by Julien McHardy (Lancaster University), Trevor Pinch (Cornell University) and my pal Nina Wakeford with the title Design, Performativity, STS. Papers ranged from ethnographers talking about their art practice, artists talking about their sociological research into mobility using art methods, sociologists performing the work of doing research (see the photo of two participants trying out the research machine designed by Julien McHardy and Kat Jungnickel) and many more. I did a 15 minute version of my performance lecture One Night With Rats in the Service of Art, which draws on 18 month ethnography of the world of fancy rats and rats in science labs that resulted in a live event at Camden Arts Centre, London in 2005.

I also dipped in and out of the other design track organized by Carl Disalvo (Georgia Institute of Technology), Tobie Kerridge (Goldsmiths, University of London) and Alex Wilkie (Goldsmiths, University of London) with the title Speculation, Design, Public and Participatory Technoscience: Possibilities and Critical Perspectives. This included papers on the materiality or lack of it in critical design, speculative design and public participation. Among others I enjoyed conversations with an artist doing a PhD in sociology, an artist doing a PhD in art practice using STS ideas, an ex designer doing a PhD in sociology about design and a designer doing a PhD in design using STS. To invoke an STS concept - some serious academic monsters here.

On the final day of EASST Nina and I organized an impromtu design and STS session open to all. We structured this by asking participants to suggest topics they had heard in the tracks that they wanted to hear more on, and then invited pairs of speakers to take on a topic for around 20 minutes, before we moved onto another one from the shared pot of topics. This worked well in allowing those of us who had been in different tracks to get a sense of the conversations we had missed and also see where some of the existing conversations between design and STS are eg around engagement and participation and the role of artefacts in research.

On Friday there is another event which some of the same people will be at, evidence of Goldsmiths being potentially an important place for this emerging conversation with new people joining them such as Noortje Marres and Michael Guggenheim. Speakers at Making and Opening: Entangling Design and Social Science include Mike Michael, Nina Wakeford, and Bill Gaver from Goldsmiths and also Michelle Murphy, Pelle Ehn, Lucy Suchman and Harvey Molotch. This looks good.
Posted by Lucy Kimbell at 7:13 pm